Hold that thought. This is a bit of a polarising feature. As voice control goes, iDrive's is pretty good. But we think it falls short of the speed, accuracy and ease of use that has so far eluded pretty much all voice control systems. And that includes Apple's Siri. Navigation has always been one of iDrive's strongest features. It was one of the first built-in navigation systems to support full seven-digit UK postcodes.

Hard to believe, but some factory sat navs still lack full postcode support. Maps-wise, iDrive has most of the bases covered, with both top-down 2D and pukka 3D views. The latter includes detailed 3D models for major buildings and landmarks. It all looks very pretty, even if we're not convinced of the practicality of full 3D modelling in built-up areas.

It tends to obscure the route ahead. Happily, the buildings and models are switchable, so you can still use the 3D view without the extras, if you prefer. One area where iDrive's nav has lagged behind the best aftermarket units, including TomTom and Garmin devices, is traffic data.

It's better than nothing, but not nearly as detailed or up-to-date as the likes of, say, TomTom's HD Traffic, which draws data from cellular phone networks to create a detailed, real-time picture of traffic conditions. However, where things get really clever is support for Google Send to Car. The idea here is to use Google Maps on a PC, Mac, tablet or mobile phone to find destinations or plot out routes with multiple waypoints. You can then use your BMW profile to fire them directly to your car. The next time you hop in, it's a simple matter of a single click to accept the data and slap it straight into iDrive's nav system.

It's a really useful feature and enables, for instance, phoning back to the office and asking a co-worker or assistant to fire over new destinations or routes on the move. You can even ring BMW Assist and have them help. The final nav-relevant feature is Google Search. It's becoming more widely available from a number of different car manufacturers. So it's nothing unique to BMW. Nor is it quite as useful as you might think. But it's still better than your typical built-in Points of Interest database.

It's no secret that BMW has shacked up pretty cosily with Apple when it comes to smartphone support. That starts with great support for music playback from iPhones, iPods and iPads. In simple terms, that means you can plug your Apple device in via a wired connection and have full access to your music library, including album art. You also have the option of streaming music wirelessly via Bluetooth. That gives you fewer options over playback via the car's controls — essentially, you're limited to play, pause and next or previous tracks.

Where iPhone and iPod integration goes to the next level is the iPod Out feature. It's all about allowing your iPhone to port interfaces and applications directly onto the main iDrive display. Essentially, BMW realises that smartphone tech develops much more rapidly than built-in infotainment systems. So allowing smartphones to drive at least some of the features makes an awful lot of sense. As far as we're aware, iPod Out itself is currently restricted to media playback functionality.

It's been out for a little while now and doesn't seem to be progressing terribly quickly. As this BMW video shows, the initial idea was a little more ambitious.

That's hand if, for instance, the driver wants to have his handset sync'ed for phone calls while the passenger streams music off another device. But here are some key highlights. Compatible with iPhones and Android handsets, the app gives BMW owners remote access to their vehicle via a smartphone. The app does quite a few weird and wonderful things, including locking and unlocking the vehicle remotely and showing its location on a map. With some BMW models, you can even flash the lights or honk the horn.

Handy if you've lost the thing in that public car park. It does happen! Next up is the broader issue of internet connectivity. This is one of our few serious bugbears regarding iDrive. That's right, brand new BMWs being sold today don't have 3G connections. Actually, that's not quite true. They do have 3G connections, they're just not enabled. That's correct, but it's no reason not to use it where available. As for apps, may we introduce you to BMW Apps.

Again, this is an iPhone-only feature that requires an app installation on your handset.

These features use your handset's internet connection, so aren't limited by iDrive's EDGE connection. You can learn more about BMW Apps in this video. The other major app is BMW Link. You get a custom portrait interface on your iPhone that majors on big buttons for ease of use on the move. Functions include music playback, navigation, Google local search and more.

In theory you can dictate emails and texts. In practice, we doubt you'll bother, since the voice recognition remains too clunky. Dispatched with Royal Mail 1st Class. The inductive coupling of the external antenna ensures the optimal network coverage - even in areas with poor network coverage. Genuine New. We will compare serial no. Countries as: Free postage. Part Number: So if you have the universal snap-in connect adapter and have an iPhone now this is the adapter that will allow you to connect it to that device. 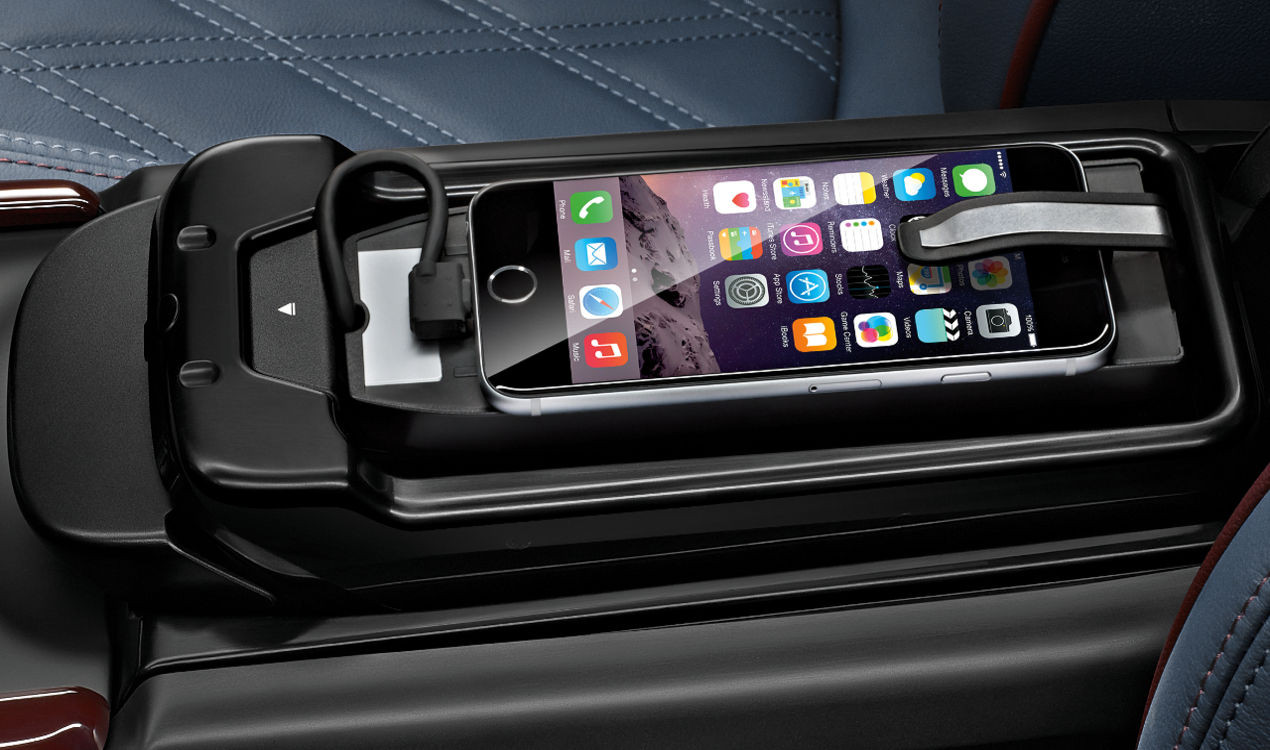