Duels games have always suffered from minor interface inconveniences, but just getting around in Magic sometimes seems to take as much mental effort as the puzzle matches of Duels past, with none of the payoff. But at least we can start craft our own decks for the first time, right? Deciding which kind of deck you liked to play with used to be a issue of fighting themed bosses and winning their deck for your own use, which ensured you knew how to use it.


Didn't like it? You could just abandon it and switch it out for another one you won off a different boss. It's worth noting that Hearthstone works this way. In Magic , you're stuck with the deck you used to win the tutorial until you can grind it into something useful. Exit Theatre Mode. That deck is always a hybrid consisting of two colors, which on the surface marks an improvement over the single-colored decks of some of the previous games.

Magic 2015 Duels of the Planeswalkers - Overview (The Good, Bad, Ugly)

But let's say you only settled on that deck because it worked especially well against the tutorial boss. The pace of progress is a slog. Thus, from here on out you're expected to grind, most notably through a new Explore mode that sends you into battle against a sea of random decks. The option to purchase themed decks was available in the past, but here the sale of cards from each arc of the campaign feels more like a necessity in light of the grind that awaits—a decision which makes some sick sense in light of the iOS version's blank price tag.

Why even bother, then, with a cover price on Steam? Microtransactions aside, it's a shame that the version of this once-proud game feels best defined by what it lacks. The questions fly by like bullets to anyone who's played the series before. Paired with an excellent free-to-play model that didn't make you feel you had to spend money to compete, a relatively simple selection of gameplay modes and the ability to quickly go online and challenge other players, it's easy to see how Hearthstone has become one of the most popular card games these days.

Hearthstone players will notice many similarities between the games. They both feature "story" modes where you play against a succession of villains to complete the story, they both allow you to duel against the AI to sharpen your skills and duel against other players to show your prowess, they both have daily quests to help you gather gold, and -- of course!

And yet, Hearthstone just seems to do most of these things better. The game board you play on is better in Hearthstone, with cards that are easy to see. The cards in Magic Duels can be hard to see even when playing on a full-sized iPad.

The tutorial is quick, easy, comprehensive and even fun in Hearthstone, whereas the tutorial in Magic Duels can be like pulling teeth, especially if you are familiar with card games. Even the process of opening packs of new cards seems more magical in Hearthstone. And the process of building a deck is much, much better in Blizzard's game. A good question with a good answer.

As a card game, Hearthstone if fun and has its own level of difficulty and strategy. But Magic: The Gathering is intense. It set the standard to which all card games are judged, and it is still the best overall card game for those who love building cool decks with unusual tactics and then rampaging opponents. To quote Spinal Tap, Magic: Veteran Magic player? Hone your skills and match wits with opponents online. Customize your play experience with 6 new cards sleeves and 5 new personas.

Experience some of Magic's most iconic moments in Story Mode, head to Battle Mode to take on your friends, or grab a partner for a four-player Two-Headed Giant battle. Build your deck of devastating spells from an ever-growing library of earnable cards. Hone your skills and try new decks and strategies against virtually endless AI opponents in Solo Mode. For Magic Duels game support, please visit: That's excessive, even for him. 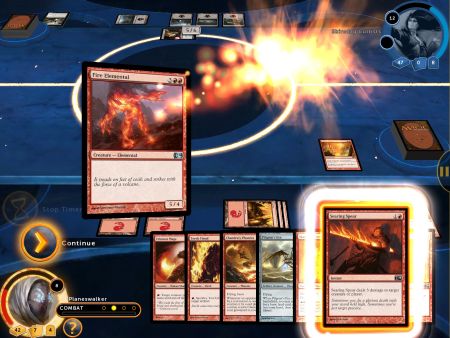 An electrifying story mode does perfect double duty: The Gathering. Definitely nice to have an app with the rules of the game built into it. Free with fun and lengthy story modes. Biggest issue was this: I played the same stage in a story mode over a dozen time and I had to uninstall. I understand with online play, perhaps the timer system is the way to go. Other than that, I think the game is just fine. This game could be stellar. It's off to an amazing start. The opening clips are nice, the effects of the menu sliders are cool but can be time consuming. The overall concept and ability to teach new players is pretty fricking rad.

A couple main issues are there are places where the app will bug out and places where it down right takes forever to load which is understandable. I think this game could easily be a 5 star review in anyone's hands if a little more love was put into it. Also, if I buy a deck it would be awesome to be able to scan the upc or card I own, but I'm sure that would be difficult to manage as MTG players often hang out together, would have to be a way to scan a card and have it only be able to do it once which would would mean every card would need a unique ID and have it available to use when I play.

I have not bought the full version yet, but haven't decided yet if I want to. It seems like this game doesn't really have any priority for updates. Also in certain instances it seems the randomness of the cards I get are rigged according to how I'm playing.