The best iPhone battery cases should be easy to toggle on and off, simple to charge, and capable of providing a good indication of how much battery life remains in the case. Oh, and of course, they should provide a lot of extra juice. On a more subjective scale, I prefer button overlays to cutouts. Keeping your iPhone in a battery case while traveling may provide an extra benefit, since almost all such cases rely on Micro-USB cables for charging—you may well have other devices keyboards, speakers that can share the same charging cable, and replacement Micro-USB cables are far cheaper than Lightning cables.

Regardless of which battery case you choose, a bit of advice: Your iPhone 5 requires more juice to charge the final 20 percent of the way. Mophie makes excellent battery cases, and sells three models for the iPhone 5: The Helium offers the least power mAh , and has button cutouts.

The Air mAh and the Plus mAh both offer button overlays. The Plus adds substantial power without being significantly larger than the Air; unless you really value the slightly smaller size, go with the Plus. One drawback to the Mophie cases is that their thick bases all require that you use an adapter cable to access the headphone jack. However, each two-piece case is easy to put on and remove. The case takes a decidedly different approach from the Mophies. The little rubbery flap that guards the Micro-USB port on the base feels awfully vulnerable to an accidental tear.

I found the tethered Lightning plug to be an odd design choice. When charging, the phone looks dopey, with a tiny cable sticking out of it. Plugging and unplugging the connector feels a bit fussy, since you have so little wiggle room. The case offers mAh of power, which is a lot, and it fits into a svelte package. The case employs cutouts around the buttons. Don't be confused by the iPhone 4 shown on the box—this case is, in fact, made for the iPhone 5.

The Power Bank is designed so that you can keep your iPhone in a slimmer case until you actually need the extra battery power: The package includes a pair of slim plastic hard-shell cases, plus a single mAh battery that you can snap onto your case-clad iPhone as desired.

Like the Freedom , the Power Bank requires that you charge it with your own Lightning cable. So, when you want to use the battery, you need to connect it to your iPhone with your overly long cable, which looks awkward.


I don't get it. If you want to use a shorter adapter, you can buy one through iBattz separately. The two single-piece hard-shell cases look nice, and the setup with the battery snapped onto it looks sharp, too. This case consists of two pieces: I really liked the look with the black battery and the red frame. You can slide off the plastic backing without needing to take the case off your iPhone 5, and swap in a different battery on the fly.

If you want the extra battery life and serious iPhone protection, this is the case to get. Like the Mojo Refuel, it consists of a main battery portion that plugs into your iPhone 5, and a thin frame that snaps down around the front. The backing plastic on the case feels a little cheap in my hand, but I like the look regardless.

The Grip Power is one of the few battery cases I tested that intentionally protrudes beyond the screen—a design that affords a bit of extra protection if you drop the phone and it lands screen-side down. On top of that, at 3. The Incipio and Odoyo cases we tested were a hair shorter, but not enough to be noticeable. They all weighed about the same. Unlike other cases, its battery is in one piece on the lower part of the case. The top is a lightweight piece of plastic that snaps into place, which makes assembling and removing the whole rig easy.

Besides the bulk conservation, we like how the Meridian is designed so that all the heft is near the base of the phone near the Lightning port. Controls are straightforward: To turn the charging on or off, you hold down a single button on the back. A single LED above tells you how much charge you have left. After more than a month of real-world use, we found the Meridian noticeably superior in day-to-day usage.

I brought it with me to airports and subsequent delays , on skiing excursions, on road trips where my iPhone and I were the sole navigators, and to nights out after a full day of uncharged work. 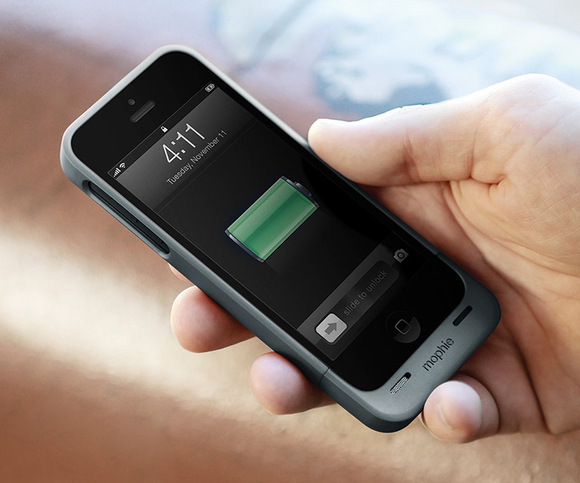 And the price has only gone down since the time of review, which would only serve to boost their evaluation of it. No other case on the market can take an iPhone 5 to percent battery and keep such a slim and easy use profile. Perhaps just as important, given the typically high failure rate of these kinds of products, Amazon reviewers like the Meridian: The Meridian has no button covers. Neither Alexander nor I had any difficulty accessing the buttons, though. Both are made of the same rubber-coated hard plastic. However, nothing else currently available offers significantly more button or drop protection—so it gets a pass for now.

There are a few other small concerns, which extend to battery cases as a whole and make us hesitant to provide a recommendation for the category at large. Once again, this is pretty common for battery cases. In order to make the case long enough to reach the Lightning connector at the bottom, manufacturers will always add just a bit of extra length, and that will get in the way of the headphone jack.

Your mileage may vary. But we are concerned about the fragile top part, which feels almost flimsy next to the sturdier plastic used on some of the other cases like the Odoyo. Definitely not good. The first priority of a good battery case, however, is power. Plus, all of the cases we looked at provided their own Micro-USB charger.

One of our staffers used the Lenmar case on their iPhone 5 for nearly a year and a half, and it displayed great longevity. When the Lenmar was new, an ammeter showed it was able to charge a phone to 99 percent capacity. We tested a brand-new Lenmar Meridian with the SE and found the case to fit that handset just as well as it did the earlier models.

In repeated tests, the Meridian provided a full percent charge to the iPhone SE before becoming depleted. The uNu DX Protective Battery Case DX-5 is almost identical to the Lenmar Meridian—in fact, it is identical, down to the weight in grams excluding the logo and button layout on the back. According to our tests, the two cases offered the same measure of mAh, although the Meridian charged our test phone a wee bit faster. Both have one-year warranties, too.

So why choose the Meridian over the uNu? We brought one in for testing with an iPhone SE, and in our two trials it charged the SE to 95 percent of a full charge once and 93 percent of a full charge the other time. We found it to be more durable and much better designed. It charged my iPhone quickly and without issues. But stock on Amazon is low, and the price directly from PhoneSuit is too high for this case to be our top pick.

A small detail we particularly love is its clever design, which makes it more durable and versatile than the Lenmar. It clips together in much the same way, with the bulk of the charger contained in a large bottom piece and a thinner one on top that connects and secures the iPhone. The case can become warm, bordering on hot, when charging, but not nearly enough so to burn. Ultimately, the price when purchased from the manufacturer, along with the lower mAh, make the PhoneSuit unsuitable for our top pick.

Frankly, the Lenmar is cheaper and has more power. Coming with two swappable 2,mAh backup batteries for a combined 4, mAh that can be charged separately is good; making the battery cover almost impossible to take off is not good. We worry that the little prongs that hold the two sections in place would break off too easily, or that over time and extended use the case may not hold together as well.

The phone case already is covered in scars and nicks from the objects I try to use to pry the case apart! Not getting iPhone 5s certification is not good. But we found that even its support of the 5 is a bit dodgy. It also comes with clear film taped over the battery contacts, which took me as well as at least one Amazon reviewer a while to figure out. Not the worst thing in the world, but an added annoyance that seems to almost taunt the user. This was also the slowest charger we tested, taking 17 minutes to charge from 40 to 60 percent.

Besides not being able to charge as well, the Plus tends to cost more than the Meridian. Mophie also has two other cases: It comes in three colors: We received one of the white cases to test, and the plastic was hard and brittle feeling, so it seemed much more apt to break.